Have you ever been drawn to one of those high vending vans in Italy, with smells of heavenly meat, garlic and herbs pouring forth? Have you had handed down to you from on high, like food from the local gods, a slice of warm, fragrant pork in a nice crispy bun? Have you supped off this heavenly dish in a square with dusty trees and hot sunlight bouncing off the front of the local chiesa?

Well now you don't have to, because this is how you make porcetta. At least it isn't really. To do the real thing you have to hose a large dead pig down with sea water for some time. But with the hosepipe ban.... anyway, this is a nice approximation.

Buy a piece of pork - I actually had a bargain chunk with scored skin of a rather awkward shape. Doesn't matter a bit. I divested it of its string vest, and slice deeply into the flesh with my wicked little curved knife, into the cuts I pushed garlic, rosemary and fennel from the garden. I also put stupendous amounts of the same fennel fronts into the roasting dish, with a slice onion and some water (wine is nice too, but we wanted to drink what we had). 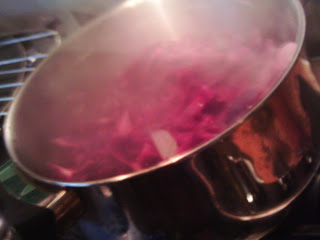 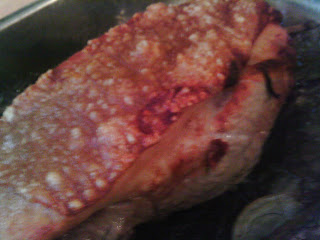 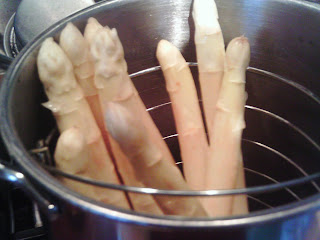 I laid the pork on top, and rubbed olive oil into the scored skin, followed by salt, rubbed well in. Then I roasted it for about an hour (20mins per lb is usual) until the skin was bubbling and golden and the flesh hot and cooked through, imbued with the fresh herbs. You then strain off the delicious liquid that accumulates underneath, and discard the herbs and onions. And there you have it, porcetta. The boy will have it in his sandwich tomorrow. Tonight we had it hot with braised red cabbage, white Belgian asparagus (a special from Lidl) and new potatoes. Very good indeed everyone agreed.

I wonder if human skin crackles? Only the defunct cannibals would know. They did call us Long Pig after all.
Posted by Unknown at 10:10 pm

Please do feel free to comment or get in touch.

Get new recipes by email

This blog will be populated with recipes from The Fresh Food Co Cookbook, my first internet content, written between 1995 and 2000. I developed a fully searchable cookbook majoring on organic vegetable recipes, to introduce customers of the Fresh Food Co's organic vegetable boxes to novel ways of preparing veg. And novel veg. In those days, calabrese, kale and celeriac were unknown and peculiar. I do hope you enjoy the recipes, they are quite informal. I don't really do measurements. But please do comment and get in touch if you want to know more.
Most recipes are my own, some are adapted from classic traditions, some from books which are all fully attributed.
If you would like to use any of this content, please get in touch first at josayoung@gmail.com.

Search by Ingredient or Dish